January 2020: The Complutense University of Madrid awarded AQT co-founder Rainer Blatt an honorary doctorate for his work and developments in the fields of quantum computation and information, quantum simulation and quantum metrology, which have created the experimental foundations of these disciplines and confirmed the corresponding developments in theoretical physics. “It is a great honor and a great pleasure for me to receive an honorary doctorate from the University of Madrid, one of the oldest and most prestigious universities in Europe and the world,” said Rainer Blatt. The Innsbruck physicist was already accepted as a member of the Spanish Academy of Sciences.

With his research team, the experimental physicist Rainer Blatt has been working on the realization of quantum computers since the mid-1990s. In addition to the vision of a universally programmable quantum computer, which is pursued by AQT, Blatt’s work is also laying important foundations for new quantum technologies that will find their way into many areas of life in the coming years and decades. He has already received numerous international awards for his groundbreaking achievements, including the John Stewart Bell Award, the Stern Gerlach Medal, and the Micius Quantum Prize. Last year he was elected to the US National Academy of Sciences. 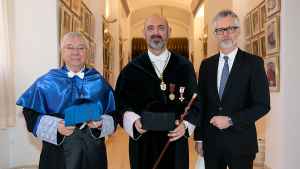 From left to right: Honorary Doctor Rainer Blatt with the Rector of the University of Madrid, Joaquín Goyache, and the Austrian Ambassador in Madrid, Christian Ebner. Photo credit: Complutense University

Thomas Monz2020-02-03T18:36:17+01:00
Page load link
We use cookies and analysis software in order to design our website as user-friendly as possible. By proceeding, you accept using this service. More information Ok
Go to Top